The David Zwirner Gallery in London, considered the third most influential artistic agent in world art – according to the Power 100 of Art Review – exhibits the works that Richard Hamilton made in Cadaqués in an exhibition designed by Huc Malla (Galeria Cadaqués) and organized in collaboration with Rodolphe von Hoffmanstahl (David Zwirner London) and Ashley Heath (director of the magazines Arena Homme + i POP Magazine).

This exhibition is of special importance because Richard Hamilton, one of the most influential artists of the twentieth century, made his first individual exhibition in Spanish territory in Cadaqués, specifically in the Cadaqués Gallery of Lanfranco Bombelli in 1974. Bombelli made 14 solo Richard Hamilton exhibitions between 1973 and 1997.

In 2014, three years after the death of Hamilton, the curators Huc Malla and Vicenç Altaió made two retrospective exhibitions reviving the spirit of the father of British pop art in what was the first individual exhibition in the private gallery of the peninsula: “Hamilton: Master de multiplos “and” Hamilton – Cadaqués “. 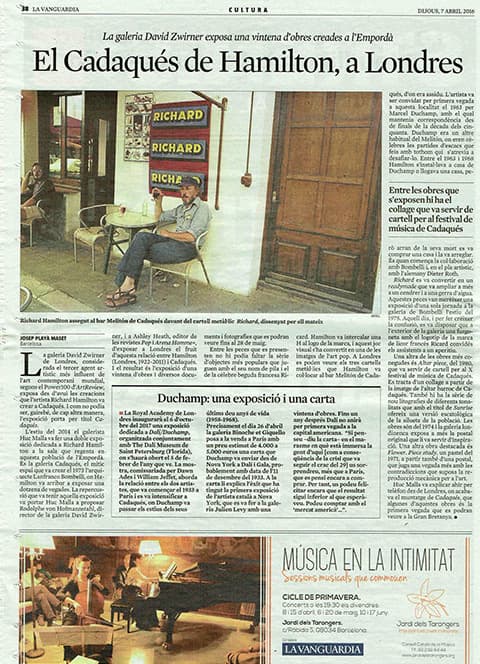